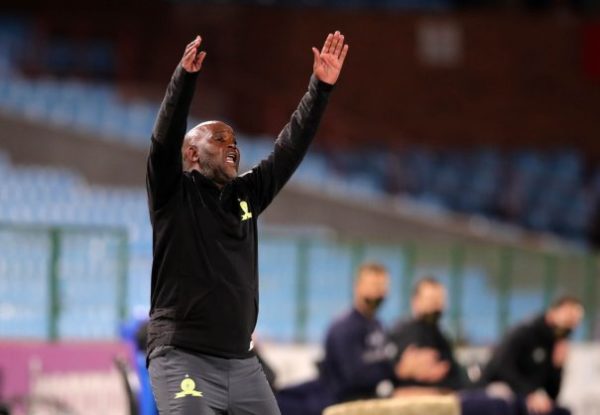 On Wednesday, Sundowns won Polokwane City 3-0 and the scoreline still leaves the defending Absa Premiership champions on level points with Kaizer Chiefs who are ahead with a three goal difference as they head into the final game of the season on Saturday.

“I believe we could have scored more and I am not happy that we didn’t score more. But you must never be ungrateful to be where you are. We kept zero behind which is very good,” said Mosimane, who went on to allude to how playing Polokwane at the Loftus Versfeld Stadium helped his team.

Moreover Downs were assigned the Dobsonville Stadium as their home venue while City were assigned Sundowns’ traditional home ground in the capital city.

“The pitch helped and the pitch at Dobsonville must be closed after the league ends and I don’t know where Swallows have to play but that pitch is not right for football, it has got a heavy load on it and it is getting worse, we can’t pass the ball. We can also say it was familiar territory to the players because they know where to be. It was good to score three goals and we deserved more. I could see that we had chances to score and you could see we had chances upfront,” said Mosimane.

“I’m so happy that Anele scored, thank God, finally after all the chances that have been coming to him. Themba Zwane, that’s his area, he is a winger that doesn’t cross the ball but comes inside and scores those important goals for us. The third goal… that boy is brilliant. It is not an easy goal, if it was anybody else they’d want to kill the goalkeeper. He is so intelligent and he comes on and scores such important goals as a substitute for us.”