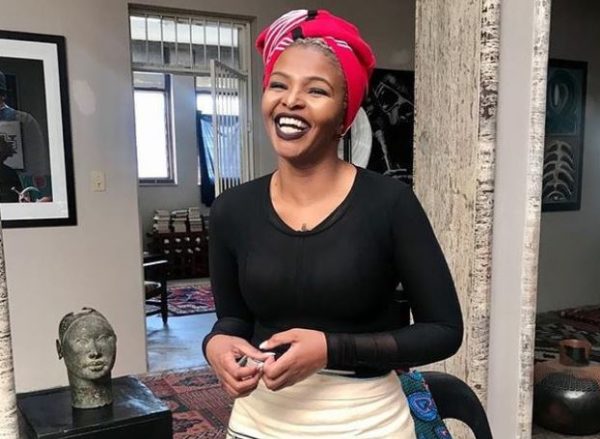 Simphiwe Dana calls out Boitumelo Madiba, her serial abuser, and she’s set to sue him following his recent deed on social media.

The singer confidently talked about how poor President Cyril Ramaphosa is, and many have applauded her for her boldness and sincerity.

However, Madiba accused her of fraud, and he shared evidence which revealed her home address.

One EFF leader is alleged to have facilitated this dodgy transaction. If you live in a glass house do not throw stones. A word of caution!

Dana got furious and dragged him on Twitter, calling him a “Leshoto Itsweng. A serial abuser”

“Boitumelo Madiba I’m coming for you, my guy. You will have to explain how you got confidential information and, further put it out in a bid to defame my name. Plus put my family at risk by publishing my address. @MadiBoity,” she said.

“I see my abuser is busy on the timeline. He’s going to jail okusalayo. I have taken a lot of shit from him, only because I dared to take him to task for being an abuser. This is what we go through when we report abuse.”

“This idiot put my address on the timeline. And how he got that letter will be investigated. I’m tired. Now I will be suing him too. It’s suing season I guess.”

“If he thinks I can’t trace it back to him he’s even more stupid than I gave him credit for. Going to the police station now.”

Simphiwe revealed that this same guy has threatened to kill her before.

“This is the same guy who said ‘I can kill you and get away with it’. While he was strangling me. I’ve been quietly going to court to deal with him. Now that he sees he actually cannot get away with it, he does this. So ke, let the whole world see what a nonsense he is.”

Boitumelo responded with more violence, as he’s ready to wash more of her dirty linen in the public.

I have energy and a resolve for this. Absolutely, tender documents confidential🙄🙄🙄🙄 https://t.co/uProZw3hya

I am willing to host you live on a public platform for you to answer the public on several concerns that I deem unethical.